Don't Place Your Laptop on Your Lap! 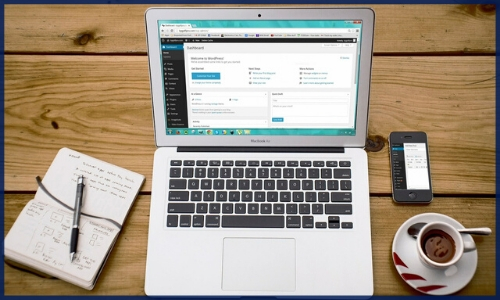 Laptop Radiation Dangers May be Greater Than You Realize
If you use your computer for many hours a day, this may be the greatest source of electromagnetic radiation danger you’re exposing yourself to, even with all the other sources of radiation in the environment today. If your computer is a laptop or a tablet, and you use it on your lap, you’re facing even more complex dangers.
Ironically, Laptops are Not Safe on Lap Tops
There is abundant research concluding that laptops are particularly dangerous, especially when used on the lap.
If you look in the small print of your laptop user’s manual, you will probably find wording something to this effect: “Warning: Do not place on lap.” If a user’s manual actually indicates a warning like this, you know this is something you need to pay attention to. If you research the subject, you'll find that the FCC report regarding safety from EMFs back in 1996 states that a laptop needs to be placed at least 20 cm from the body.
Additionally, the 1996 FCC regulations only measured thermal dangers of laptops, however, what most people — independent researchers and the general public alike — are concerned about these days are the non-thermal hazards of laptops. The long-term effects on the immune system are still widely unknown, but there are links being drawn between laptop radiation and serious conditions and diseases.
Laptop Radiation and Tumor Development
Research recently published in the archives of the Environmental & Occupational Health Journal cites a study in which they measured EMF levels in five commonly used laptops of different brands. Although they found that the EMF values were within the guidelines put out by the International Commission on Non-ionizing Radiation Protection, they also found them considerably higher than those recommended in recent guidelines put out by two other sources: the Swedish Board for Technical Accreditation, and the Swedish Confederation of Professional Employees. The EMF values in laptops were deemed risky in these guidelines for tumor development.
The Closer, the More Dangerous
It was also noted that EMF values were alarmingly high when the laptop was close to the body. The power supply induces strong intra-corporal electrical current densities in both adult and fetus subjects—71% - 483% and 182% - 263% higher, respectively, than ICNIRP basic restrictions recommend to prevent adverse health effects.
In conclusion, the researchers state:
“Laptop is paradoxically an improper site for the use of a LTC which consequently should be renamed to not induce customers towards an improper use.”
Laptop Radiation Danger Less When Using a Table or Desk
Health experts recommend that if you absolutely have to use your laptop on your lap, you should insert a sturdy pillow of at least 6” thickness between your lap and the laptop. Otherwise, it’s best to use it on a table or desk, as the radiation falls away rather quickly with increasing distance.
What About Your Hands on the Keyboard?
Because of the dangers associated with close proximity to the laptop, even typing on it can be harmful. For safety’s sake, experts suggest keeping at least 30 cm away from laptop, and, if possible, getting an external (non-wireless) keyboard and mouse.
Reproductive Health Endangered
Laptop radiation affects sperm count. Men should be careful about using a laptop on their lap, especially if concerned about reproductive health. A study to evaluate the direct impact of laptop use on human sperm was published in January 2012, in Fertility & Sterility Journal, showing a significant decrease in sperm motility and an increase in sperm DNA fragmentation after just four hours of exposure.
This study is similar to the tests done with men wearing cell phones on a belt or in pants pockets, published earlier in 2008, in Fertility & Sterility, which showed statistically significant changes in the men’s sperm count.
Although these studies on laptops measured non-thermal effects, there are other studies that have shown that sperm may also be damaged through thermal effects when a laptop is used on a lap.
Testicular Cancer Linked with Laptop Radiation
According to Cindy Sage, environmental consultant and public policy researcher since 1982,
“Overwhelming evidence shows that RF can cause DNA damage, and DNA damage is a necessary precursor to cancer.”
Somewhat more graphically, David Carpenter, MD, director of the institute for Health & Environment at the University of Albany, states:
“When you hold your laptop on your lap, what you’re essentially doing is radiating your pelvis. So that all the concerns that affect that area are of concern.”
He cites several studies that point to a heightened risk of testicular cancer for men who keep RF-emitting devices close to their pelvises.
Carpenter adds a note about women:
“The studies aren’t quite there yet, but I think we can say that anything that might cause cancer almost always causes birth defects, so pregnant women—or those wanting to become pregnant soon—should take extra precautions.”
Common Symptoms of Non-Thermal Radiation Exposure
Avoiding Laptop Radiation Dangers
No matter if you're feeling symptoms at this point or not, it’s clear you should use your computer with care. As well as keeping it as far from your body as possible, we highly recommend putting an EarthCalm Quantum Cell on it. The Quantum Cell is a small, unassuming patch that can help mitigate the harmful effects of EMFs and radiation from all of your electronic devices.
"In the past, I haven’t been able comfortably to work at my laptop -- say, in a cafe -- for more than an hour or so, before the feelings of agitation and head-achey-ness tell me it’s time to stop. Since I began using your product, those feelings of agitation and discomfort are all but gone. I feel energetically at ease while working at my laptop, which is no small thing."  (Elizabeth Reninger, Boulder, CO)
Page Sources:
Exposure to Electromagnetic Fields From Laptop Use of “Laptop” Computers C. V. Bellieni MD (2012) VIEW HERE
Is Your Laptop Dangerous? Penn State (2014) VIEW HERE
Previous Post
Next Post