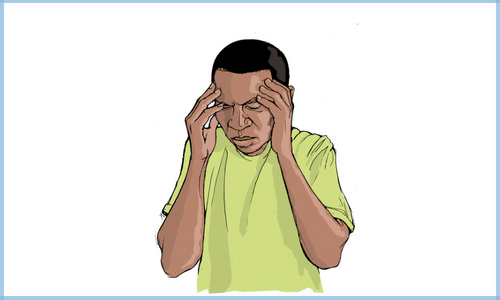 Down with the headaches!!
Here at EarthCalm, we hear from a lot of people with health problems due to the many hours they spend at their computers. Wi-Fi headaches are especially common.
Betsy G. of Palm Springs, CA told us about an interesting kind of headache that she started having after she’d installed Wi-Fi in her home.
Disabling Headaches
“It’s a strange kind of headache to describe. It’s not a migraine (which I also get). It’s really like someone’s hands are actually squeezing my head: there’s just this terrible pressure. It’s so painful, I can’t think straight.”
She continued to describe the dilemma she faced, which led to her disabling the Wi-Fi in her home, which was very inconvenient, as both she and her husband used their computers and printers a lot for work.
Betsy’s job had become especially difficult for her before she disabled the wireless internet connection. Her job also involved a lot of phone work and because of the unbearable pressure in her head, she would inevitably have to lie down in order to be able to concentrate on what someone was saying to her on the phone.
“Thank God, no one on the phone could see me when I was talking to them—they’d really wonder at my professionalism!” But it was all she could do in the circumstance.
Weakness, Dizziness, Digestive Problems
Even after disabling the Wi-Fi, the computer itself continued to cause her headaches and other health symptoms, such as weakness, dizziness, and digestive problems.
She added that she was taking all sorts of medications in an attempt to live with the headaches: pain meds, tranquilizers, and muscle relaxants. She was also seeing a chiropractor and having acupuncture treatments on a weekly basis. Although all these things helped to some degree, it was extremely expensive, and none of it was really addressing the headaches.
We suggested that she try plugging in a Home EMF Protection System and re-enable the Wi-Fi function again, to see what would happen. We told her that the product would transform the hazardous cloud of radiation into a beneficial healing field that would extend all through the house, and that this generally helped enormously with headaches caused by WiFi.
Betsy was doubtful that anything could really help her headache; she was only calling because a friend had told her about EarthCalm, but she was desperate so she finally ordered the product.
"It's a Miracle!"
A week later, she called back. “Omigod!” she exclaimed. “I can’t believe it—my strange pressure headaches are gone. It took about an hour after turning the Wi-Fi back on, and I was scared to do that. But that awful pressure in my head finally just released. It’s a miracle!”
She’s now able to concentrate on her work, and can actually sit at her computer when she’s on the phone. She feels much more productive than before and says that she experiences a greater sense of ease and well-being in general when she’s in the house. Her husband is happy, too. He is pleased to have his happy, healthy wife back! And...... he likes his Wi-Fi.
EarthCalm Can Help
Many people have headaches caused by Wi-Fi and don't know it- it’s very common.  A simple test to see if your headache is being caused by Wi-Fi is to plug in the EarthCalm Infinity Home EMF Protection System. We have a 90-Day Money Back Guarantee, so you can feel free to test our products out too!
Previous Post
Next Post