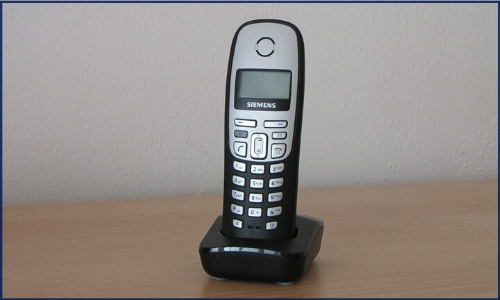 Cell phone radiation is absolutely something to be concerned about, but what few people know is that household cordless phones emit an alarmingly high level of radiation as well.
A few years back, cordless phones were mainly analog type phones, which weren’t much to worry about, but most cordless phones sold these days are DECT (Digital Electronic Cordless Telephones). These phones broadcast microwave radiation 24 hours a day at an extremely high power. They send a sharp rise of continuous electromagnetic energy broadcasting throughout your home, even when your phone is not in use.
Cell Phones vs Cordless Phones
Unlike cell phones, DECT cordless phones work at a fixed power; Cell phones turn their power down to the lowest level possible when near a cell tower, but DECT phones continue to generate a high level of radiation constantly, so their pulses are maybe even more aggressive than those of mobiles. In addition, cordless phones can be more dangerous than cell phones because of the frequency of the pulse. DECT pulses at 100 Hz, while a mobile phone generally pulses at 217Hz —both of these pulsing frequencies have been found to have biological dangers.
Sleep Problems Due to Cordless Phone Radiation
Two of the most important health effects caused by having a cordless phone in your home, especially in your bedroom near your bed, are sleep disturbance and insomnia. The pulse of a DECT phone is in the high alpha range of brain waves. This confuses your brain waves as they try to match that pattern. This is disturbing enough during the day when your brain does its best work when you’re wide awake, in beta brain wave mode. But trying to get deep sleep while in the high alpha range is next to impossible. To get truly restorative sleep, your brain needs to access the slow delta range. This is the range in which your body heals and detoxifies itself.
Other Health Effects
Not only do the pulsed waves of a DECT phone prevent you from getting restorative deep sleep, they also disturb many other body rhythms, such as:
• Heart rate variability
• EEG
• EKG
• Breathing patterns
• Bowel movements
• Detoxification
• 24-hour meridian activity
The DECT pulsed waves also block the blood-brain barrier, allowing circulating toxins to enter your brain. In addition, they affect endothelial cells in the gut mucosa, disrupting the gut barrier. This, in turn, can cause leaky gut syndrome, leading to food and environmental allergies.
Research on Cordless Phone Radiation
Recently, a report by independent researchers was released documenting, among other things, that cordless phones are just as dangerous as cell phones when it comes to brain tumors and acoustic neuromas.
An important research team led by Professor Kjell Mild, a Swedish biophysicist, has produced a number of leading papers on cell phone health effects. An early study linked brain tumors to the use of analogue mobile phones. Newer research repeated the test and then looked at digital mobiles and DECT cordless phones. The results showed that all three types of phones were linked to increased tumor rates.
The extra tumors only start to show up after about five years of use, but there is increasing dose-related-response with minutes of use per month and number of years of use. Mild discussed the results of his studies at an international conference chaired by Alasdair Philips of Powerwatch.
German Medical Doctors are Concerned
Over a thousand medical doctors in Germany have endorsed the Freiburger Appeal, which indicates that people's exposure to electromagnetic fields (mainly mobile and DECT) is triggering widespread illness.
“Out of great concern for the health of our fellow human beings do we—as established physicians of all fields, especially that of environmental medicine—turn to the medical establishment and those in public health and political domains, as well as to the public. We have observed, in recent years, a dramatic rise in severe and chronic diseases among our patients, especially:
• Learning, concentration, and behavioural disorders (e.g. attention deficit disorder)
• Extreme fluctuations in blood pressure, ever harder to influence with medications
• Heart rhythm disorders
• Heart attacks and strokes among an increasingly younger population
• Brain-degenerative diseases (e.g. Alzheimer's) and epilepsy
• Cancerous afflictions: leukemia, brain tumors
Moreover, we have observed an ever-increasing occurrence of various disorders, often misdiagnosed in patients as psychosomatic:
•    Headaches, migraines
•    Chronic exhaustion
•    Inner agitation
•    Sleeplessness, daytime sleepiness
•    Tinnitus
•    Susceptibility to infection
•    Nervous and connective tissue pains
Since the living environment and lifestyles of our patients are familiar to us, we can see—especially after carefully-directed inquiry—a clear temporal and spatial correlation between the appearance of disease and exposure to pulsed high-frequency microwave radiation (HFMR), such as:
• Installation of a mobile telephone sending station in the near vicinity
• Intensive mobile telephone use
• Installation of a digital cordless (DECT) telephone at home or in the neighborhood”
Cordless Phone Radiation Protection
Reducing exposure to radiation is key. Knowing what we know now about cordless phone radiation, we, here at EarthCalm, encourage everybody to go back to the old, standard, corded phone. If you are unable to do so, we suggest applying good EMF protection to both your cordless phone and the base unit. The EarthCalm Quantum Cell is easy to apply and will help your body make sense of the constant information being passed between the phone and base. For more info, click here.
Sources:
Cordless Phone Radiation: Cordless Phones Even More Dangerous Than Cell Phones? Burrell (2019) VIEW HERE
Mobile Phones, Cordless Phones and the Risk For Brain Tumours Hardell (2009) VIEW HERE
Cordless Phones: The Unspoken DECT Hazard At Home And At Work TetraWatch (Web) VIEW HERE
Previous Post
Next Post