Are Cell Phones Killing the Bees? 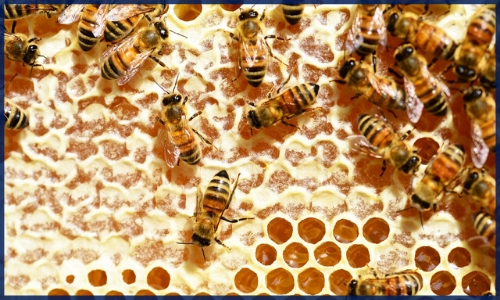 Bees are essential to the growing of food on this planet. Without these small pollinators, we humans wouldn’t have the variety or abundance of crops that we have. In fact, we probably wouldn’t be able to survive without them at all.
Decline of Bee Populations
In the last decade, the honeybee population world-wide has taken a huge dive; billions of bees are dying due to what’s known as Colony Collapse Disorder (CCD). In many cases, it’s unknown why colony collapse occurs, but it has been happening at an unprecedented rate.
Possible Theories
Scientists have pondered the different possible reasons for the decline of the bee populations including, pests and predators, diseases, climate change, and pesticides. Most concur that the current pests and predators of bees have been around for centuries — nothing new there. The same goes for disease. Climate change may have something to do with declining populations, but we’re not exactly sure how. The use of bee-killing pesticides is most definitely a problem, but still can’t account for the entirety of the CCD cases happening globally, especially in regions where conventional farming isn’t happening.
Bees and Cell Phone Radiation
An increasing number of scientists researching the decline of bee populations, are finding a link to the dramatic explosion of cell phone usage that has also happened in the last decade. Thousands of cell towers have been erected not only in our cities, but in outlying farmland and forests, as well. The steepest decline in bee populations is reported in the US and Europe, where cell phone use has been greater than in other parts of the world.
Many kinds of tests have been conducted. French biologists attached tiny microchips to the bees to track their daily behavior patterns in an effort to see what’s killing them. Researchers at both the Panjab University in Chandigarh, India, and at the Landau University in Switzerland fitted cell phones to the beehive and activated them intermittently to see what would happen. All have seen a direct link between the cell phones and the decline of the bee population.
Loss of Navigation Skills
Cell phones are killing the bees. What actually happens to the bees when their hive is near a cell phone or cell tower? Sainuddereen Pattazhy, researcher and dean in the department of Zoology at SN College, Punahur, explains:
“The navigation skill of the worker bees is dependent on the earth’s magnetic properties. The electromagnetic waves emitted by the mobile phones and relay towers interfere with the earth’s magnetism, resulting in the loss of the navigation capacity of the bee. Then it fails to come back. Also the radiation causes damage to the nervous system of the bee and it becomes unable to fly.”
When the worker bees become disoriented and fail to find their way back to their hive, then the queen, the eggs, and the immature bees are left to die. What’s also interesting is that parasites, wildlife, and other bees that normally raid the hive and pollen left behind when a colony dies, refuse to go anywhere near the abandoned hives.
Increase in "Worker Piping"
Daniel Favre of the Swiss Federal Institute of Technology, a researcher who’s conducted over 83 experiments with cell phones and bees, has found that there is also a dramatic increase in noise or what is called "worker piping" when phones are in use near the hive. To the bees, this piping indicates a disturbance in the hive and is a warning for the bees to leave.
Cell Towers and Bees
If cell phones can have this kind of dramatic impact on a hive, then cell towers must create a much greater one. A graphic example can be found in anecdotal form with a columnist, Barbara Hughes, who visited a Benedictine abbey near the mission in San Luis Rey, California. She writes:
“One of the monks who has been a beekeeper at the abbey for 40 years explained how, until numerous cell phone towers were constructed on the back of their property, he had been collecting 100 gallons of honey a week. But as the use of cell phones expanded, all of his bees died within a few weeks, until he discovered a small area near the base of a hill where he could not get service. Once he moved his hives to that that particular area, the bees once again began to thrive and reproduce.”
What would happen if honeybees become extinct?
If the decline of the bee population continues as it has, we will end up with a global food crisis of unthinkable proportions. Currently there are very few restrictions on the erection of cell towers, and the usage of cell phones continues to explode. Knowing now that there is a probable link between wireless tech and CCD, we need to change the way we do things, or we will all be in major danger.
Resources:
Extremely Low Frequency Electromagnetic Fields impair the Cognitive and Motor Abilities of Honey Bees Shepard, Lima (2018) VIEW
Effect Of Electromagnetic Field On Honeybees Yasar ERDOGAN, Mahir Murat CENGIZ (2019) VIEW
Previous Post
Next Post