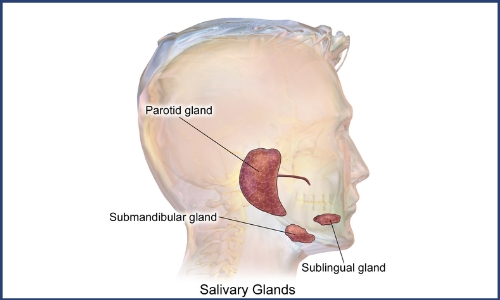 Traditionally, parotid gland tumors have been very rare. And they’ve generally shown up in people after the age of 50.
Not so anymore. According to a study done by a research group in Israel, there has been a sharp increase in these types of malignant tumors, and most of them are occurring in people under the age of 20. Cell phone radiation is the suspected culprit.
What is the Parotid Gland?
The parotid gland is a type of salivary gland in the cheek—the one closest to where most people hold a cell phone.
What’s important is that the new data from the Israeli study shows no similar increase in the two other major types of salivary glands—the submandibular and sublingual glands—that are further away from where a phone is generally held.
The study, headed by R. Czerninzki of the Hebrew University in Jerusalem at Hadassah school of Dental Medicine, reported a significant increase in incidence of parotid gland tumors over last 30 years. Finding a four-fold increase in parotid gland cancers from 1970-2006, they found the steepest increase happened after 2001.
US Senate Hearing on Cell Phone Radiation
In 2008, Dr. Siegal Sadetzki, principal investigator of another study on cell phone radiation, testified in a US senate hearing that cell phones were identified as a contributor to salivary gland tumors. In his report, he stated that risk of getting a parotid tumor on same side of head used for speaking on cell phone increases by:
• 34% if you are regular cell phone user & have used a cell phone for 5 yrs
• 49% if you have spoken on phone for more than 266.3 hours during your lifetime
• 58% if you’ve had more than about 5500 calls in your lifetime
Parotid gland tumors are not the only tumors being linked to cell phones. Learn more about the hazards of cell phone radiation here. (https://shop.earthcalm.com/Cell-Phones-and-Wireless-Hazards)
Sources:
Risk of Parotid Malignant Tumors in Israel (1970-2006) Czerninski (2011) VIEW
An Israeli Scientist, Dr. Siegal Sadetzki, has Found a Link Between Cell Phone Usage and the Development of Tumors  Tel Aviv University (2008) VIEW
Previous Post
Next Post