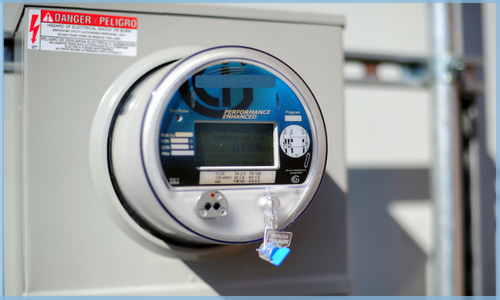 Smart Meter Radiation Risks
Are smart meters hazardous to your health? Smart meter radiation emissions are both greater in volume and more frequent than power companies admit, according to more and more independent EMF specialists measuring them. Consumers are becoming concerned.
What are Smart Meters?
Smart meters are electric and gas meter reading devices being installed all over the US. They are a first step towards creating a national smart grid. Designed to enhance energy efficiency and make widespread adoption of renewable energy easier, smart meters are radio transmitters that communicate data from homes and businesses to the gas and electric company through a matrix of radio signals. They also allow people to measure and monitor their own energy consumption in order to reduce it.
Smart Meter Health Risks
There are growing numbers of activists who are protesting against smart meters, they contend that the radio frequency (RF), which smart meters emit, is harmful to human health. People living with meters are claiming a wide range of mild to severe symptoms. Some of the most common symptoms include concentration and memory problems, dizziness, tinnitus, heart palpitations, headaches, sleep disruptions, nausea, anxiety and behavioral problems in children.
People are especially concerned about certain groups who are exceptionally vulnerable to smart meter health risks, such as children (who absorb radiation at a greater rate than adults), electrosensitive people, people with pacemakers, and chronically ill people whose immune systems are compromised.
Unclear Answers about Smart Meter Radiation Levels
Power companies seem to be unable to give consistent, believable answers about either how frequently smart meter radiation is emitted, or what the peak power is of the radiation signal at certain distances. Some representatives say the meters transmit RF six times a day; others, once an hour. Independent RF specialists have measured them every 45 seconds, or even twice in a minute.
As for peak power of smart meter radiation signals, there is even more confusion. Power companies maintain that the RF transmissions are well within FCC standards; they say that the meters transmit data for only a fraction of a second and are far weaker than other everyday radio frequency emitters like cell phones, cell towers, and Wi-Fi.
Putting aside the debate over the safety of other RF emitters, there’s reason to doubt the assurances from power companies that smart meters are safer than these other devices. Independent environmental EMF consultants have found that peak pulses are far greater in intensity than the “average pulse” that many utility companies claim - sometimes up to 1000 times more powerful than a cell phone. Because of the skewed and inaccurate way in which they figure the number of pulses per minutes, their figures of an “average” pulse is greatly reduced.
Indeed, assurances of utility companies are reminiscent of promises that have been made over the years by plastics and chemical manufacturers who initially claimed that what they were producing was safe.
Thermal and Non-Thermal Effects of Smart Meter Radiation
Aside from any of this, what’s important to understand is that the FCC safety standards are based only on thermal effects of radiation, meaning: How high can radiation go before the body tissues start cooking? Research has shown that the thermal effects of microwave radiation are not the only effects to be worried about. There are also non-thermal effects of RF that are very disturbing.
Smart Meters Often Don’t Comply with FCC Standards
Set back in 1996, FCC standards were based on studies which used healthy, 6’2”, 220 lb men exposed for only short periods of time - very different from the reality with smart meters, in which women, children, and people in fragile health are continuously exposed to the radiation.
Furthermore, other sources of radiation (such as Wi-Fi, cell phones, and other wireless devices) were not present in the testing. For all these reasons, the report strongly cautions that smart meters are not safe.
The World Health Organization (WHO) and the National Toxicology Program have also studied the effects of RF on human health. Their updated results are that, among other things, RF can significantly increase the risk of glioma, a deadly brain tumor. [View]
Protection Against Smart Meters Health Risks
There are no warning signs about the health risks that come with a smart meter. At this point, if you are permitted in your area to opt out, it will cost you more. Opting out seems advisable if you have been suffering from any unexplained ailments since the installation of your smart meter. Also, you might want to look into finding protection against the RF emitted by the meter.
EarthCalm Can Help
EarthCalm has a highly effective solution for diminishing the health risks from smart meters:  The Infinity Home System. With the 90-day, money-back guarantee that EarthCalm offers, you can test the Infinity Home System for yourself and see how much better you feel.
References:
1.BioInitiative Report, 2012. [View]
2. Lai, Henry. Biological Effects of Radiofrequency electromagnetic fields. Encyclopedia of Biomaterials and Biomedical Engineering. G.L. Gowlin and G. Wnek: Taylor and Francis Books, 2005.
3. Havas, Magda. Analysis of Health and Environmental Effects of Proposed San Francisco Earthlink Wi-Fi Network. May 31, 2007.
4. Persson, Salford, Brun. Blood-brain barrier permeability in rats exposed to electromagnetic fields used in wireless communication; Wireless Networks, Vol 3, Issue 6, Dec. 1997; pg 455-461.
5. Mariea, Tamara and Carlo, George. Wireless Radiation in the Etiology and Treatment of Autism: Clinical Observations and Mechanisms; Journal of the Australian College of Nutritional and Environmental Medicine, August 2007.
6. Havas, Magda. Analysis of Health and Environmental Effects of Proposed San Francisco Earthlink Wi-Fi Network. May 31, 2007.
Previous Post
Next Post